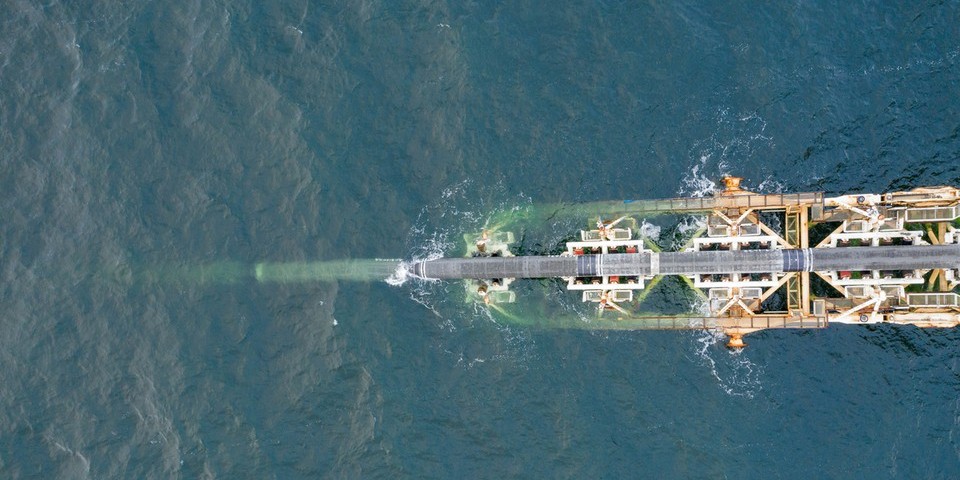 Natural gas is a natural ally on the road to a low-carbon economy By Paul Corcoran, Chief Financial Officer, Nord Stream 2 AG The EU’s Energy Union Strategy has quickly become one of the Juncker Commission’s most consequential political initiatives. Now that we are nearing the end of its term, the European Commission declared that progress on the Energy Union has “increased the security of energy supply and improved the overall resilience of the EU’s energy system to external energy shocks.” At the same time, climate policies have become much more important than anyone would have imagined at the beginning of the outgoing Commission’s term.

The journey to net-zero emissions has only just begun Undoubtedly, a lot of work has been done in energy and climate policies. But the journey to net-zero emissions has only just begun. The Commission seems increasingly determined to follow an ambitious path to decarbonising the European economy, as reflected by the adoption of its 2050 strategic vision on 28 November 2018. Going forward, the transmission of broad political headline objectives into real, workable and competitive solutions on the ground will be key for consumers and industry alike. By substituting coal and other CO2-intensive fossil fuels, natural gas plays an ever more important role in achieving Europe’s emissions targets and enabling a low-carbon economy. The crucial role of natural gas is further underscored by its positive contribution to security of supply: it enables industrial energy consumers to continue relying on an abundant and affordable energy supply that renewable sources simply cannot provide in the foreseeable future. This is vital for growth and prosperity across Europe. Unlocking the potential of natural gas To unlock the true potential of natural gas in the coming years, it needs to be made available abundantly and at competitive prices. Otherwise, it will be outcompeted by coal and other fossil fuels. For Europe and its dwindling domestic gas production capacities, the calculation is simple and straightforward: the more import options and capacities the continent has, the better for the price, and the better for energy security. Case in point: The Groningen gas field in the Netherlands, which until a few years ago produced more than 40bcm of natural gas per year, will be closed completely in a few years’ time. The implications are already visible. In its latest Gas Market report from 23 April 2019 , the European Commission noted that indigenous gas production in 2018 fell to 120bcm, equivalent to an 8% year-on-year drop. Nord Stream 2 is part of the solution In light of this rapid decline of domestic gas production, European consumers and industries will increasingly rely on rising gas imports. Nord Stream 2 will be part of the solution by providing additional import capacity and complementing existing import routes as well as LNG. Nord Stream 2 will connect European consumers on the shortest, most direct route to the vast Bovanenkovo gas field on the Yamal peninsula. This is a competitive advantage for Europe. At the same time, it is clear that Nord Stream 2 alone can meet only a portion of Europe’s growing future import demand. Today more than ever before, suppliers need to and can compete for their share on the European gas markets, to the benefit of European consumers. The great global push towards decarbonisation opens opportunities for climate and business alike, especially in Europe. Nord Stream 2 is a good example for this: if coal-fired power generation was substituted by the 55 billion cubic meters of gas that Nord Stream 2 will annually deliver to Europe it would save up to 160 million tons of CO2 emissions. This can be done at a relatively low cost. And without Nord Stream 2, Europe would need approximately 600 tanker shipments of LNG every year to meet the same volume. And obviously, the carbon footprint of piped gas is significantly better than ship transportation of liquid gas that often originates from fracking in the US, Qatar or Australia. Last but not least, it should not be forgotten that due to technical reasons the operation of a state-of-the-art underwater pipeline like Nord Stream 2 emits much less CO2 than existing overland pipelines. Numerous studies, for example by the University of Cologne’s ewi research institute and energy consultants IHS Markit, have also shown that a robust gas import infrastructure has a moderating impact on natural gas and wholesale power prices. Therefore, it helps to safeguard European competitiveness in a global context. According to analysis conducted by ewi, European consumers stand to benefit from between €7.9 billion and €24.4 billion when Nord Stream 2 is available. Regrettably, these benefits are exposed to political interference and persistent attempts to put artificial hurdles in the way of Nord Stream 2. For example, the ultimate costs of a procedural delays in Denmark could amount to up to €20 million per day for European households and businesses. European gas markets need a reasonable, reliable and investor-friendly regulatory framework To ensure that Europe’s long-term path toward net zero emissions will succeed while at the same time its economic competitiveness is safeguarded, the EU must remain committed to a reasonable, reliable and investor-friendly regulatory framework. The next European Commission, which will take up office in November 2019, has an ideal opportunity to demonstrate its commitment with the upcoming 2020 Gas Market Design Review. Natural gas must be firmly embedded in Europe’s long-term decarbonisation strategy, and investors must have confidence that they will not become subject to political manoeuvres. Regrettably, in the case of Nord Stream 2 a market-based regulatory approach has often been overridden by the Commission’s ambition to misuse the internal market’s energy regulation as a tool for pursuing foreign policy objectives. This does not serve the interests of Europe’s consumers and industries and it compromises investors’ confidence in legal certainty. This is why we have recently reached out to the European Commission to receive confirmation that our investments made prior to the enactment of the new gas market rules are protected to the same extent as the investments of other investors in the same situation. Nord Stream 2 is committed to contribute its share to Europe’s climate strategy and to provide reliable, affordable and clean energy to European consumers. This will require a fair, non-discriminatory regulatory framework and level playing field – achievements that the EU is praising itself for in comparison to many other jurisdictions around the world.