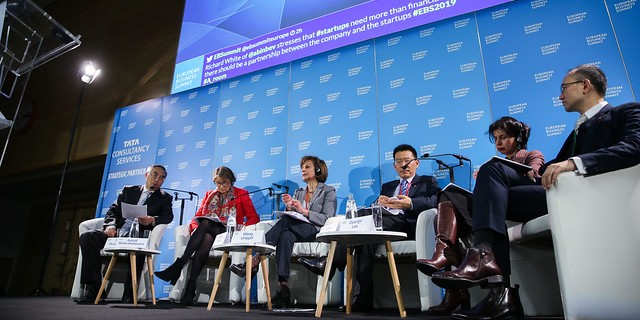 On May 6, 2019, the Chinese Mission to the EU, the European Business Summit (EBS) and the Facilitating Center for Building the Belt and Road of the National Development and Reform Commission (NDRC) of China jointly held the Belt and Road Initiative 6 Years On: Towards Higher-Quality Development Roundtable in Brussels. H.E. Ambassador Zhang Ming, Head of the Chinese Mission to the EU, and Mr. Nirj Deva, Chairman of the EU-China Friendship Group of the European Parliament and Executive Chairman of the Belt and Road Initiative Policy Coordination Committee, delivered keynote speeches to an audience of over 300 participants from political, business and academic sectors of China and Europe.

Ambassador Zhang said in his keynote speech entitled Promoting High-Quality Belt and Road Cooperation between China and Europe that the Second Belt and Road Forum for International Cooperation (BRF) was widely followed and very fruitful, and that the Belt and Road cooperation is entering into a new stage. He made three points regarding the BRF.

First, high-quality was the keyword. The Belt and Road Initiative (BRI) must be open, green and clean, and follows a high-standard, people-centered and sustainable approach. Second, the idea of building a global partnership on connectivity was widely supported. An important approach is to forge synergies between the BRI and other countries’ development initiatives, as well as regional and global development agendas. Third, a broad structure of the Belt and Road cooperation has come into being, led by the BRF and supported by sectoral cooperation initiatives. Ambassador Zhang noted that he was glad to hear European voices during the forum. Vice President of the European Commission and leaders or representatives of some EU member states were there. China and Europe signed cooperation documents on investment and financing, third-party markets, science and innovation, and China-Europe Railway Express.

Europe has become a major participant, contributor and beneficiary of the forum. China and Europe should work closer with each other on the fronts of multilateralism, concrete results, innovation, and high quality. As the Ambassador said lastly, we need a new and more constructive approach, and new actions to truly substantiate the cooperation. Together, we would be both better off and make our world a better place. In his keynote speech, Mr. Deva said that the BRI is an extraordinary initiative in human history. Over the past six years, it has been translated from a vision into a reality, advocated and championed by President Xi Jinping. He noted that the BRI has provided the EU with plenty of opportunities for trade and economic growth. China is creating new platforms for more foreign businesses to enter the Chinese market by lowering tariffs, expanding market access, shortening the negative list, etc. All these efforts should be welcomed by Europe. He also stressed that the world today is in the most turbulent and most destructive stage in three centuries. China, or even Asia as a whole, and Europe should support and work with each other in meeting all the challenges. Only in this way can we push human society forward into a new stage. In the panel discussion, representatives from think tanks, businesses, financial institutions and trade associations had an in-depth exchange of views on two themes, i.e. "High-Standard Strategy Coordination on China-Europe Connectivity" and "High-Level Pragmatic Cooperation on China-Europe Connectivity". They also answered questions from the audience.

The European Business Summit is an influential annual conference for Europe political and business sectors that attracts an average of more than 2,500 participants every year. This was the second BRI-themed roundtable co-organized by the Chinese Mission to the EU and the EBS. It was intended to brief European friends on the second BRF outcomes and to cement the synergies between China and Europe on connectivity and advance China-Europe cooperation.